A story behind every song…

Dave Wakeling is a hell of a nice guy! Dave loves to tell you the stories behind his songs, either from stage or after the show.  Ask any one of the thousands of fans who have met him over the years and that’s what you’ll hear. Never mind that Dave is the singer/songwriter from two of the most popular bands of the end of the millennium, The English Beat and General Public, he’s a stand up man from Brum.  Whether it’s the personal as political in How Can You Stand There, making politics personal in Stand Down Margaret, taking a stand against global warming as he did making Greepeace’s Alternative NRG, or helping little kids stand tall with Smile Train, Dave has always stood for something.

And like the might Redwoods of his adopted home of California (dude!), it’s  easy for Dave to take a stand because of his strong roots…

The six member band consisted of singer/songwriter Dave Wakeling (vocals & guitar), Andy Cox (guitar), David Steele (bass), Everett Morton (drums), Saxa (saxophone) and Ranking Roger (toasting). The band managed to fuse all of their respective musical influences – soul, reggae, pop and punk – into a unique sound that was highly danceable. Along with contemporaries such as The Specials, The Selecter and Madness, The English Beat became one of the most popular and influential bands of the British Two Tone Ska movement.

Over the course of three albums, The English Beat achieved great success in their home country, charting several singles into the top 10. In addition to their UK chart success, in America the band found a solid base of young fans eager to dance to the their hypnotic rhythms and absorb their message of peace, love & unity. Their constant touring with iconic bands such as The Clash and The Police helped to boost their popularity in the States.

Despite his huge success, Dave didn’t stop singing and acting on the problems caused by what he called the “noise in this world”. The band donated all the profits from their highly successful single version of “Stand Down Margaret” to the Committee for Nuclear Disarmament. They donated their music to causes including the anti-nuclear benefit album “Life in The European Theatre”, “The World of Music and Dance” album focusing on indigenous people’s art, and lent their voice to The Special AKA’s anthemic song of freedom “Free Nelson Mandela”, to name but a few.

Dave Wakeling once told me that every great band only has three really good albums. And true to form, The English Beat disbanded in 1983, after their third album, “Special Beat Service”.

It was at this point that Dave recruited Roger, Stoker (drums) and Mickey Billingham (keyboards) of Dexy’s Midnight Runners, Horace Panter (bass) of The Specials, and  Clash guitarist Mick Jones to form a new band: General Public.  Their first album, All The Rage, met with phenomenal success, charting high in the U.S., U.K. and even winning the band a coveted Juno award in Canada for Best New Artist in 1984.

After the fantastic success of All The Rage, Dave spent two years writing and recording the follow-up album, Hand to Mouth.  Like Wha’ppen before it, this sophomore effort was more introspective, taking fans along with him on Dave’s continual exploration of the light and dark side of human emotion.  The album was a critical and fan favorite, and spawned two hit singles, Too Much or Nothing and Come Again.

After the second General Public Album, Dave decided to go in a different musical direction and follow his own muse.  Having previously worked in Hollywood with John Hughes on his  iconic film Ferris Bueller’s Day Off, Dave returned to work for the silver screen, producing the soundtrack and recording the title track for Hughes 1988 film She’s Having a Baby. After that he recorded his first solo record, No Warning.  The album maintained the pop sensibilities for which General Public had been known, and in addition exposed even more of the mind and emotions of the man behind it all.

After his solo album, Dave decided to put his notoriety to good use, and pursued a full-time position saving the planet at a job with Greenpeace.  This didn’t mean a break from music, just a break from being the lead singer, as he stepped inside the mixing booth to produce the Greenpeace album Alternative NRG.

What made this album outstanding and ground breaking was not just the outstanding roster of rock luminaries Dave convinced to appear on the album, including REM, U2, Midnight Oil, UB40, Annie Lennox, and Sonic Youth, to name a few, but the fact that it was recorded in 14 separate venues across America using a recording truck powered exclusively by solar power – a 160 square foot, 1,920-watt solar panel array contained in a trailer known as Cyrus. The power produced by the solar array, once converted to AC (the sun is DC), generated enough electricity to meet the needs of an average-size house for several days, and was proof positive of the viability of solar and other forms of alternative energy.

I’ll take you there…

After a metaphorical bump on the head from Elvis Costello for abandoning his post as crooner (a true story, ask Dave about it some time), Dave felt the need to “take us there” one more time.  Dave teamed up with old friends to reform General Public and wrote and released his third GP album, Rub It Better, in 1995.  The album and Dave’s return to the stage were met with an outpouring of critical raves and fan support.  The album provided yet another hot single for Dave, with his infectious reggae remake of an old Staples Singers song, I’ll Take You There, climbing the singles charts and anchoring the soundtrack of the very hip, box office hit Threesome, starring Lara Flynn Boyle, Stephen Baldwin, and Josh Charles.

Having stricken a whole new group of fans with Beat-madness, Dave then disband General Public in 1996. However, true to his philanthropic bent and always looking to help other musicians out, Dave reformed GP in 1998 to play a benefit concert for Sweet Relief, a wonderful grassroots organization that provides assistance to career musicians.

The English Beat goes on…

Having accepted and embraced his true calling again (thanks Declan) , Dave continued to perform, touring back and forth across the States.  Dave did it old school, touring clubs and playing countless gig from sea to shining sea, re-connecting with his Beat and General Public fans and building a strong and loyal fan base that continues to love his songs and embrace the evolution of his music.

Then, in February 2003, we saw a dream come true for Dave and many Beat fans as the band reunited (no, not on that show) for a mini-tour in the UK, which culminated in their sold-out command performance at the Royal Festival Hall! Dave, Everett, Roger, Blockhead and  the star of the show, Saxa, took the crowd by storm!  It was a magical homecoming for Dave and a really wonderful experience for the fans, with band members and fans gathering from around the globe for a night or irie, ska-ful rock-steady Beat!  Being the hard driving ska legend that he is, however, Dave Wakeling was not content to rest on his laurels after the RFH reunion…

Tongue firmly in cheek, feet on the ground and eyes on the future, Dave takes the stage time and again, touring across the States, Canada, the UK and beyond. He does it for two reasons. First, he loves to play music, period. Second, he sees his job here on Earth to be bringing a message of love, unity and a steady, rhythmic groove of danceable songs with a message to the masses. Fans see him as an icon and to the young bands coming up he’s the elder statesman of ska. His swooning croon has been covered by such rock luminaries as Peter Townshend, Eddie Vedder and Elvis Costello.

He’s repeatedly referred to in the press now as a “legacy artist” and an “icon”:  he’s wasn’t quite sure what it all meant and thought he might be entitled to some extra initials after his name (he wasn’t).

However, he learned what those terms actually mean early in 2006 when, much to his surprise, bemusement, and eternal joy, the Rock & Roll Hall of Fame contacted him and asked him for his  trademark Vox teardrop guitar, to be displayed in a place of honour alongside the axes of Jimi Hendrix and Nirvana’s Kurt Cobain.  Truly a wonderful and humbling experience for a working class boy from Brum!

Dave is currently entering a musical renaissance and, still enjoying that legacy moment, he’s now planning on going into the studio to lay down a new album. Dave also continues to tour as The English Beat, as he had done for the last three decades, with an amazing all-star ska backing band (featuring players from The English Beat, General Public, and guest stars from the likes of The Specials, The Selecter, and other 2Tone bands) playing all the hits of those bands and his new songs.  Expect the unexpected and prepare to be blown away by the ever-changing King of Ska!

One thing that hasn’t and won’t change though, Dave Wakeling remains a hell of a nice guy. 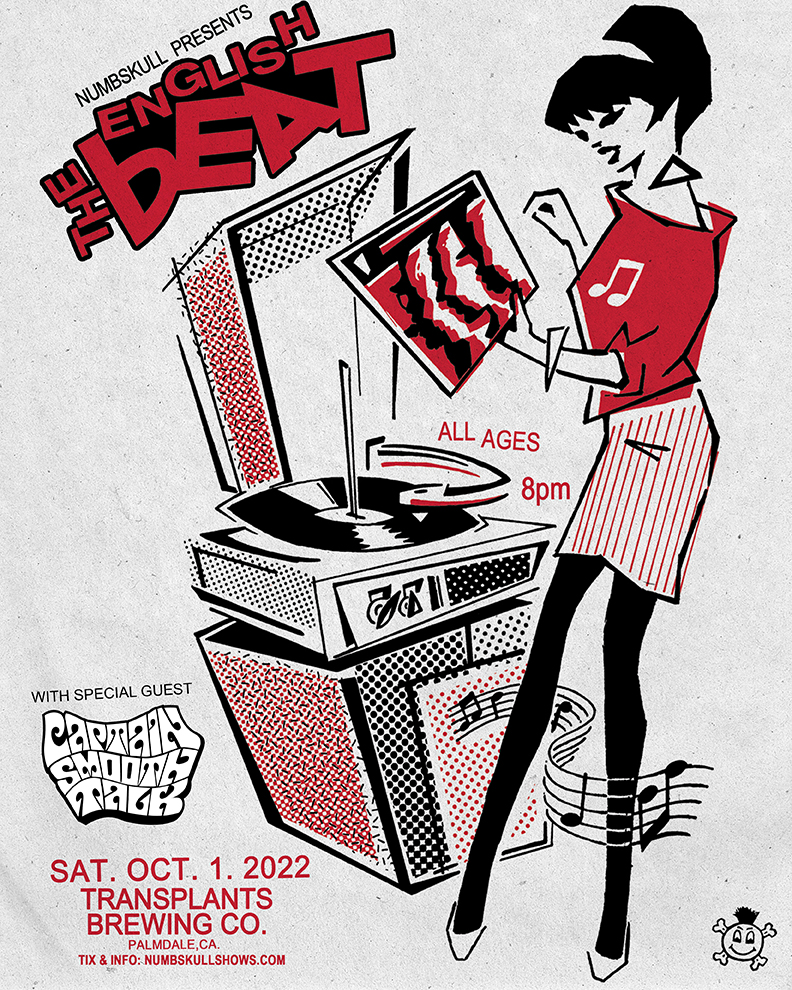 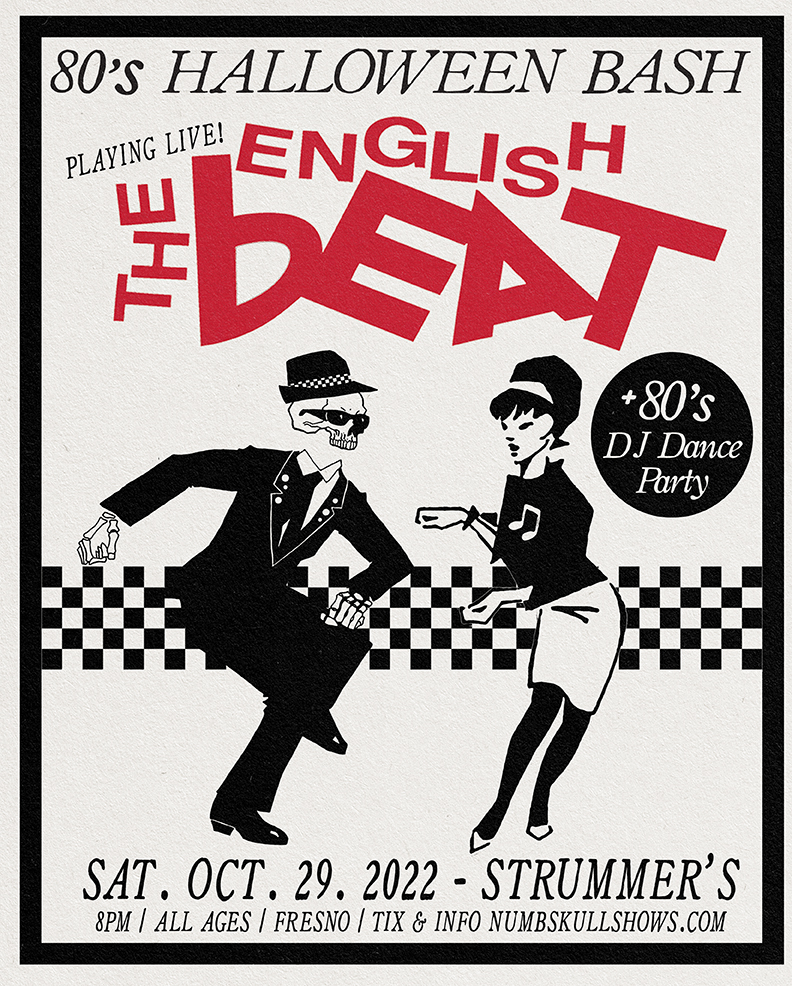 80s Halloween Bash with THE ENGLISH BEAT + 80s DJ Dance Party
Strummer's , Fresno, CA
All Ages
More Info Buy Tickets
We use cookies on our website to give you the most relevant experience by remembering your preferences and repeat visits. By clicking “Accept”, you consent to the use of ALL the cookies.
Do not sell my personal information.
Cookie SettingsAccept
Privacy & Cookies Policy